If you're a nerd, it's the first question you asked when the clock struck midnight, 2015.

"So where are all the flying cars? And the hoverboards we were promised?"

In the blockbuster film hit "Back to the Future," which came out 30 years ago, and its sequels, this, 2015, is "the future" - the year Marty McFly and Doc Brown zoomed off to visit in their souped-up flying DeLorean.

Indeed the whole premise of the sequel was about all the amazing technology that we would have in the future, today. So how did the team behind the movies do in their predictions?

Here's the history - and mystery - of drunkenness

(CNN) - Marijuana got all the headlines in 2014, but when it comes to Americans' favorite method of altering their state, booze remains on top.

Gallup reported earlier this year that 64% of U.S. adults say they "have occasion to use alcoholic beverages" and other studies suggest it increases significantly this evening. There will be tragic ramifications of course - and here's where we caution you to drink responsibly and take a cab home - but let us for now think of the glass as half full.

Think about that for a second: most of us will drink this New Year's Eve. Whether champagne, beer, wine or liquor, it's a process and tradition older than most of the world's religions. Even though it's often bad for us.

After all, as Frank Sinatra once said: "alcohol may be man's worst enemy, but the bible says love your enemy." 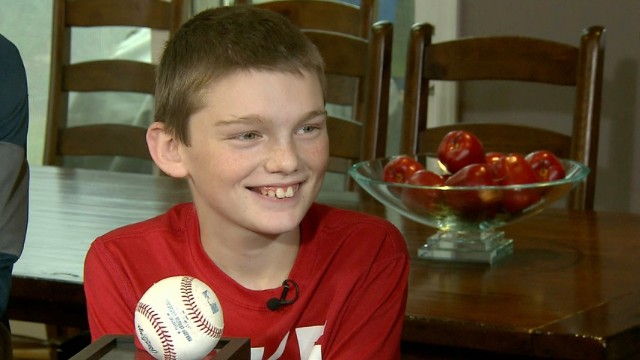 The veteran Red Sox announcers were so astonished by the boy's generosity they sent a reporter to the stands for an interview, and to replace the ball.
END_OF_DOCUMENT_TOKEN_TO_BE_REPLACED

When the feds seized a T-Rex

Editor's note: Go inside one of the most amazing dinosaur discoveries and learn why the federal government seized it. CNN Films' "Dinosaur 13" premieres at 9 p.m. ET Thursday, December 11, on CNN.

(CNN) - Imagine spending your entire career searching for something buried somewhere within the Earth - and then when you miraculously find it, the federal government seizes your discovery.

That's the predicament paleontologist Peter Larson found himself in after he and his team unearthed a nearly complete Tyrannosaurus Rex skeleton in 1990, preserved for some 65 million years in what is now the state of South Dakota.

It is the most intact T-Rex skeleton ever found.

(CNN) – It's a simple test that could solve hundreds of thousands of sexual assault cases and save countless more women from becoming victims of repeat offenders.

But right now, across this country, 400,000 rape kits are just sitting there untested, because police departments do not have the money to examine them.

Right now the funds to potentially fix this backlog are stuck in Congress, tied to a budget battle, while victims wait, and sexual predators walk.