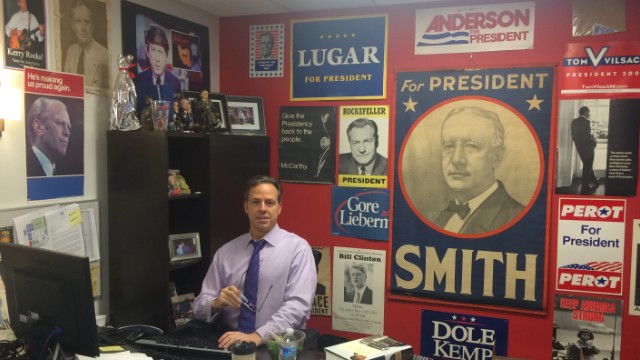 (CNN) – Our very own Jake Tapper took to Twitter Monday afternoon, answering your key questions on the 2014 midterm elections. Check out the conversations below.

.@alternativeRNC I believe the average is that the president's party loses 4 Senate seats and 27 in the House during midterms. #AskJake

.@JB_DMA Absolutely, though whether the president signs those bills is another matter entirely. #AskJake

.@Amarie_Val When control of the House/Senate changes parties, it's a big deal in terms of what laws will pass & reflection of public mood

.@mylifeback i asked Reid spox @AJentleson if Dems lose Senate will Reid run for Minority Leader. Answer: "Yes and he will win" #AskJake

.@mneff2 GOP official told me "it's the cherry," meaning it wld likely be harbinger of strong GOP night but not essential victory. #AskJake

.@JoshRichwine No; no one wants to make a "call" on the election until votes are in. Too many recent examples of bad poll info. #AskJake

.@thomasgoffe won't know for certain until after election but as of now #NCSen most expensive overall. Suspect #AKSen on per-vote #AskJake

.@keriquattlebaum a) It's often a lesser of 2 evils choice. b) theyre often not as evil as appear at this pt in a grueling race #AskJake

.@philosoldier84 Consultant I know says anti-Obama and anti incumbent moods both potent - and to expect surprises. dont know where #AskJake

.@JimmyToTheJay My wife bought me a lovely new reddish tie. Shirt will be blue. Neither is a political statement. #AskJake

@jaketapper #AskJake Will control of Senate be settled tomorrow night?

.@FranklinsRule I think we're likely to have a runoff but we will know which party controls the Senate by Wednesday. #AskJake

@about_scout In the next 20 years? sure. Demographics suggest that. Any time soon? Nope. #AskJake

.@aalali44 Both POTUS/immigration exec order cuts two ways. Hard to tell before voting whether the decision was right. Will be much debate.

.@JimmyToTheJay There are GOP elders who suspect a good night tmrw but it will be a sugar high bc of troubling 2016 demographics. #AskJake

Plus a few bonus responses to a question on office decor choices:

a query on musical preferences:

one on sports allegiances:

and a question about a galaxy far, far away: