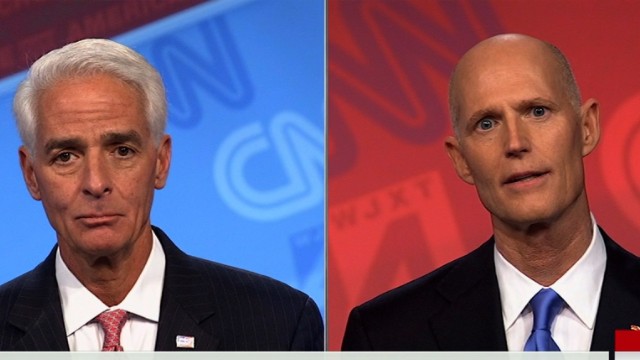 Ebola, jobs, and wages
Is Gov. Scott confident Florida hospitals could treat Ebola patients? Why should voters trust Crist when he's changed his party and his views? And what about jobs, and minimum wages?

Medical marijuana, FSU, and executions
Floridians say mild forms of medical marijuana are not enough, what's Scott's message to them? Some Florida State University football players are accused of crimes, does FSU have a serious problem? Does Crist really think that Scott takes his role in executions lightly?

Cuba, immigration, and climate change
Would Crist be willing to meet with Cuban leader Raul Castro? Do the candidates support Sen. Marco Rubio's bill to give undocumented workers a pathway to citizenship? And what is Scott's stance on man-made climate change?

The 'do-over'
What is one thing Scott and Crist wish Florida would give them a "do-over" on?