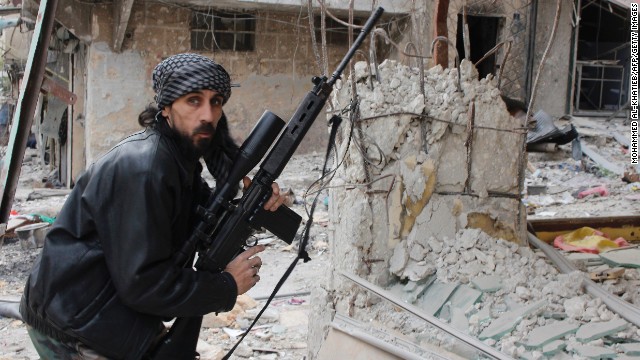 A letter issued Wednesday by a top leader of the Free Syrian Army makes it clear that its fighters intend to use U.S. aid to fight not only ISIS but the forces of Bashar al-Assad, regardless of a reluctance by the Obama administration to publicly acknowledge that fact. The letter – issued as Congress began voting on aid and assistance to the rebels – affirms “the Free Syrian Army’s continued commitment to removing the twin terrorists Bashar al-Assad and Abu Bakr al-Baghdadi from Syrian soil,” and directly calls upon the U.S. Congress to help them accomplish that task.

Obtained by CNN and available here, the letter was in direct response to Rep. Rick Nolan, D-Minnesota, who opposed the House legislation that provided funding and military aid to Syrian rebels fighting ISIS. On Tuesday on the House floor, Nolan questioned whether members the Free Syrian Army were truly moderates.

“Did you hear the latest news?” Nolan asked his colleagues. “Just came out over the wire, I bet you guys haven’t heard it. The founder of the Free Syrian Army, okay? The one we’re going to give five billion dollars to? Riad al-Assad? He just says, ‘We’re not going to use that money to fight ISIS. No, no, we’re fighting Assad!’”

On Wednesday, as the House prepared to vote on aid to the Free Syrian Army, saying that many Members of Congress had asked him about this quote, Nolan wrote to his colleagues: “'The Free Syrian Army has announced that it will not sign up to the U.S.-led coalition to destroy the Islamic State (IS) militants in Iraq and Syria,’ the story read. 'The group’s founder, Colonel Riad al-Asaad, stressed that toppling Syrian President Bashar al-Assad is their priority, and that they will not join forces with US-led efforts without a guarantee that the US is committed to his overthrow.’"

The letter responding to Nolan, from Brigadier General Abdul Ilah Al-Bashir, the chief of staff of the Supreme Military Command for the Free Syrian Army, stated, “The heroes of the Free Syrian Army have sacrificed thousands of brave souls in the fight against the impostor ‘Islamic State’ over the past year. We fully plan to continue this fight until Baghdadi’s complete and utter defeat.”

Al-Bashir did not in any way hide that the Army would use the aid to fight Assad. In fact, he directly linked Assad to ISIS. “The Assad regime collaborates with ‘Islamic State’ and other terrorist groups like Hezbollah that seek our extermination,” he wrote. “We will be unable to finish off ‘Islamic State’ without also acting to stop Assad’s barbaric assaults. We call upon the world community, and the United States Congress in particular, to fulfill their humanitarian and security responsibilities by providing the Free Syrian Army with robust support to bring a Syria free from terrorism in all its forms.”

Dolan isn’t the only one sounding the alarm that it’s naïve to think the Free Syrian Army will only use these weapons to attack ISIS, also known as ISIL.

In a hearing on Wednesday, Sen. John McCain, R-Arizona, asked the Secretary of Defense Chuck Hagel and the chairman of the Joint Chiefs of Staff, General Martin Dempsey, if the U.S. would take action to defend the Free Syrian Army from any attacks from Assad, whom, he said, “will attack them from the air. …Will we prevent those attacks from taking place, and take out Bashar Assad's air assets, both helicopter and fixed wing, that will be attacking the Free Syrian Army units?

“We're, first of all, not there yet, but our focus is on ISIL, and that is the threat right now,” Hagel said.

After a back and forth with Hagel, McCain said he guessed he wouldn’t get an answer, so he turned to Dempsey. “It seems to me that you have to neutralize Bashar Assad's air assets if you are going to protect these people that we are arming and training and sending in to fight. Is that inaccurate, General Dempsey?”

“If we were to take Assad off the table, we'd have a much more difficult time forming a coalition,” Dempsey said. “I think what you're hearing us express is an ISIL first strategy. I don't think we'll find ourselves in that situation –”

Dempsey said that if the U.S. trained the Free Syrian Army and helped them “develop a military chain of command linked to a political structure” then “we do not have to deal with it now.”

“That's a fundamental misunderstanding of the entire concept and motivation of the Free Syrian Army,” McCain said, noting that Assad’s forces have “killed many more of them than ISIL has.”