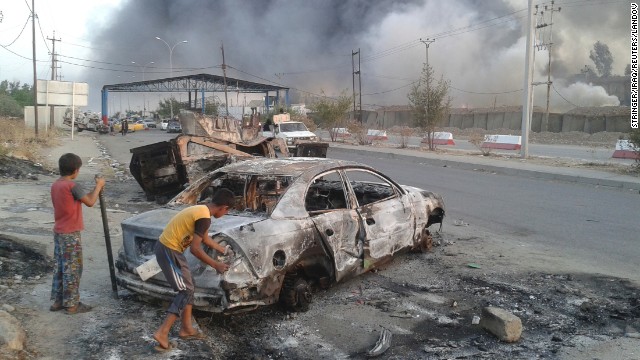 Senior administration officials on how we got here in Iraq

(CNN) – The United States "will not be sending U.S. troops back into combat in Iraq," President Barack Obama said Friday, adding that he would be reviewing a range of other options in coming days.

"Any action that we may take ... has to be joined by a serious and sincere effort by Iraq's leaders to set aside sectarian differences, to promote stability," he said.

Are sectarian differences to blame for this crisis?

“I think any analyst would say (Shiite Prime Minister Nuri) al-Maliki hasn't reached out to the Sunnis, which undercut the moderate Sunni political and tribal leadership, creating space for al Qaeda in Iraq, which is now ISIL," a senior administration official tells CNN.

“The presence of U.S. troops did not compel Iraqis to act in a unifying fashion. It’s not like they were all acting as responsible national leaders until we left in 2011," the official said. "There’s not some assurance that if we had 10,000 troops in Iraq, that Maliki would be acting differently."

Critics argue that the White House should have tried to negotiate an agreement to keep more troops in Iraq after the deadline, to pressure Maliki and to combat groups like the Islamic State in Iraq and the Levant (ISIL).

"We tried," another senior administration official tells CNN by e-mail.

"The Iraqis said no. After 10 years of our presence, virtually the entire political class wanted us out. Even the Kurds wouldn’t press it," this official said.

If the U.S. had kept more troops in Iraq, he adds, they would served an advisory role, not in a combat capacity.

"The idea our forces would be taking on ISIL on the ground is nuts. They would have been stuck in the middle. And our embassy would have remained a target. As soon as our troops left, the Shiite militia stood down and there were zero attacks on the embassy.

The administration has "been hammering" Maliki to address legitimate grievances from the Sunnis and Kurds, he says.

"His inability (and) refusal to lead in this manner alienated the Sunni street – which does not like ISIL – and made it harder for their leadership to engage him," said the official.

"Until that problem is fixed, military action may be able to stop the bleeding, but it won’t cure the patient," he said.