Why the U.S. is stepping up presence near Ukraine

(CNN) – In response to the Russian incursion into Ukrainian territory, Defense Secretary Chuck Hagel told the Senate Armed Services Committee that the U.S. is beefing up its presence in the region.

But will that rattle the Russians at all?

"What that is intended to do is bolster the confidence of our allies and our friends, to make sure they know we're standing by and paying attention. That's the intended recipient," said Marks.
END_OF_DOCUMENT_TOKEN_TO_BE_REPLACED

GOP Rep.: It was a mistake not pushing back harder against Russia in 2008

(CNN) – Conservatives have slammed President Barack Obama for what they consider to be a tepid response to Russia's incursion in Ukraine's Crimea peninsula.

But former President George W. Bush responded in a similar manner when Russia invaded Georgia in 2008. That, says Republican Rep. Ileana Ros-Lehtinen, was a mistake.
END_OF_DOCUMENT_TOKEN_TO_BE_REPLACED 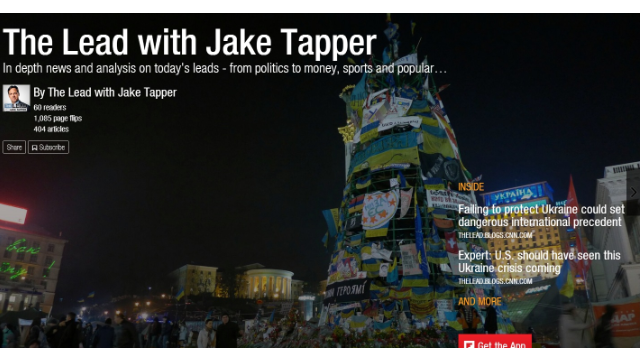 CNN's 'The Lead with Jake Tapper' is on FlipBoard

(CNN) – All the stories, plus all the social media content, analysis, and conversation from "The Lead" and from CNN's "Jake Tapper" are now in one place – on our new FlipBoard magazine.

CNN's Jake Tapper sat down with FlipBoard to share his thoughts on how to succeed as a Washington journalist, and how social media has changed the media landscape.

"(It takes) a lot of hard work, lot of realizing that you're being not told the whole story all the time, and a need to talk to as many people as possible so you can get the full story," says Tapper.
END_OF_DOCUMENT_TOKEN_TO_BE_REPLACED

(CNN) – World leaders meet in Paris Thursday for talks that were intended to focus on Lebanon. Instead, Ukraine will likely dominate the agenda. A statement from the meeting brings up the 1994 Budapest agreement, which, among other things, convinced Ukraine to give up its nuclear weapons in exchange for the promise that its territorial sovereignty would be respected.

If that agreement is not upheld, and if the world does not show that it is serious about ensuring the promises made to Ukraine are kept, it could set a dangerous precedent as the U.S. and other countries try to convince countries like Iran and North Korea to give up their nuclear weapons.
END_OF_DOCUMENT_TOKEN_TO_BE_REPLACED

Expert: U.S. should have seen this Ukraine crisis coming

(CNN) – Russian forces remain in effective control of Ukraine's Crimea peninsula, in a tense standoff with Ukrainian forces loyal to the new interim government in Kiev.

But European Union and European commission members are balking at imposing sanction against Russia for its military actions in Ukraine.

Now, experts are asking what the U.S and the European Union were thinking when it backed Ukrainian protesters.
END_OF_DOCUMENT_TOKEN_TO_BE_REPLACED