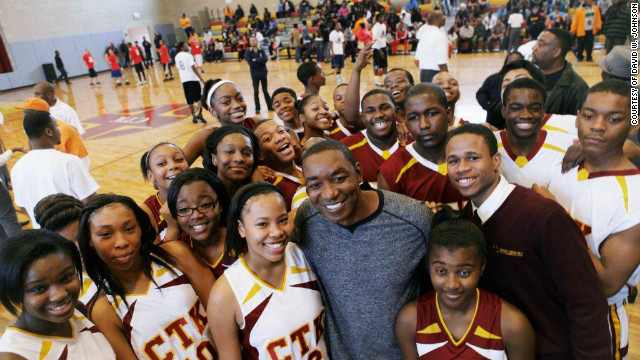 "College athletics, as it intersects with the educational and life outcomes of black male athletes, is in crisis. This crisis is evident in many ways, including the prevalence of once-aspiring professional black male athletes who end up with no degree, few job prospects, and used-up eligibility," Thomas wrote.

The problem with student athletes slipping through the cracks has gotten worse since his days in college, Thomas said in an interview with CNN’s “The Lead with Jake Tapper.”

“As the money has continued to rise in athletics and the reward for winning has become so pricey, the student athlete is really there only to be an athlete and not necessarily a student,” said Thomas. “He is there really to entertain the student body, but not necessarily have access to an academic career.”
END_OF_DOCUMENT_TOKEN_TO_BE_REPLACED

(CNN) - That "miracle" weight-loss product you've seen on TV may not live up to the hype.

The Federal Trade Commission has charged four companies with deceptive advertising related to their weight loss products. "Operation Failed Resolution," as the FTC calls it, is an effort by the federal agency to crack down on companies' misleading claims about products that allegedly help consumers slim down.
END_OF_DOCUMENT_TOKEN_TO_BE_REPLACED

"This is an administration that runs a very tight ship, and there are almost no decisions that are made of any consequence that do not run directly through the front office," said Democratic New Jersey State Assemblyman John Wisniewski, who is leading the investigation into the bridge lane closures.
END_OF_DOCUMENT_TOKEN_TO_BE_REPLACED

CNN's "The Lead with Jake Tapper" took the liberty of cutting two faux attack ads based on the book.

Watch "The Lead with Jake Tapper" at 4 p.m. ET for more on this story.

(CNN) - E-mails emerged on Wednesday purportedly from top aides to New Jersey Gov. Chris Christie that bolster the case that access lane closures to the George Washington Bridge were borne from a political vendetta against opponents of the governor, and were not the result of an incompetent traffic study as his administration claimed.

Christie's office could not be reached for comment, but he has previously said he knew nothing about allegations of political retribution against the Mayor of Fort Lee, where the traffic lanes feed into the nation's busiest bridge across the Hudson River, for not endorsing him in his re-election bid.

Those cited in the series of e-mails and text messages subpoenaed by Democratic legislators and obtained by CNN and other news outlets did not respond to requests for comment or to verify the communications.