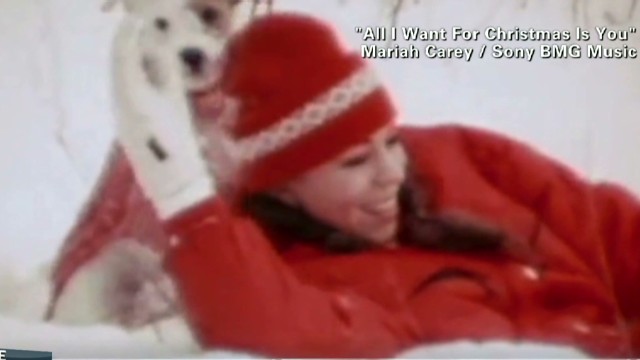 Why new Christmas songs fail to break through

(CNN) - As you're zipping around holiday shopping, attending religious services, and generally spreading Yuletide cheer, you're likely to notice something – you're humming the same tune as last year. And the year before that, too.

How about the classic duet "Baby It's Cold Outside"? It premiered in the 1949 film "Neptune's Daughter" from MGM. This year, you can hear it sung by the gang from reality television show "Duck Dynasty."

Every year, holiday stations churn out the same musty standards – the only twist, it seems, is who is belting them out. But no new songs seem to break the candy cane ceiling.

"It's hard to figure out why it is that even though we have the top stars of today writing original Christmas songs, none of them have really broken through," said Slate writer Chris Klimek, who pinned down the Christmas song trend in an article Monday.

Klimek says the latest modern holiday song to stick was Mariah Carey's "All I Want for Christmas is You."

"It's not that there are no more good Christmas songs coming out, it's that we as a culture have stopped embracing the ones that do come out. It's been 19 years since Mariah Carey released "All I Want for Christmas Is You." And that's really the last time a pop song has entered the public consciousnesses across genres and age groups," said Klimek.

Before that, The Waitresses' "Christmas Wrapping" – now a perennial holiday song on the radio – came out in 1981.

It's hard to write a new standard.

Klimek argues that big pop names haven't stopped writing Christmas songs, it's just that the public has stopped tuning in.

"They want to do something that's popular with their fan base when really Christmas is about nostalgia, it's about hearkening back to good times, to youth," said Berklee College of Music professor Ani Johnson.

Johnson teaches music business; she worked in the music industry for years with everyone from Gloria Estefan to Parliament-Funkadelic.

"With Gloria Estefan it was really easy," said Johnson. "Often times artists do this in a point in their career when they're trying to do things that they did at the beginning of their careers that were wildly popular."

Singers Kelly Clarkson, Mary J. Blige, and Jewel have all released new Christmas albums this year. There are only a handful of new Christmas songs among those three albums. So far, none of them are getting touted as instant classics.