Pirates kidnapped the captain and chief engineer from a U.S.-flagged oil platform supply vessel in the Gulf of Guinea on Wednesday, the official said.

Details about the crew members' conditions and the condition of their ship, the C-Retriever, were not immediately available.

Louisiana-based Edison Chouest Offshore, which owns the vessel, did not immediately respond to requests for comment.

Travel by sea can be perilous in the region where the attack occurred, one analyst said Thursday.
"The danger there is extreme," said Capt. Don Marcus, president of the International Organization of Masters, Mates & Pilots.

GOP congressman: I don't want Sebelius fired, I want her to do her job

Executives from CGI federal – arguably the main contractor for the problem-plagued healthcare.com website – and several other vendors appeared before the House Energy and Commerce Committee today, answering questions on the website's botched rollout.

Republican Congressman Tim Murphy, Chair of the House Oversight and Investigations subcommittee, was a vocal critic at the hearing, calling the federal health exchange website a "clunker."

The Pennsylvania congressman said no one took responsibility for the problems plaguing the website.

"Every one of them pointed at somebody else," Murphy said in an interview on "The Lead with Jake Tapper." "They were just saying their little window was fine, and somebody else has to take the blame."
END_OF_DOCUMENT_TOKEN_TO_BE_REPLACED 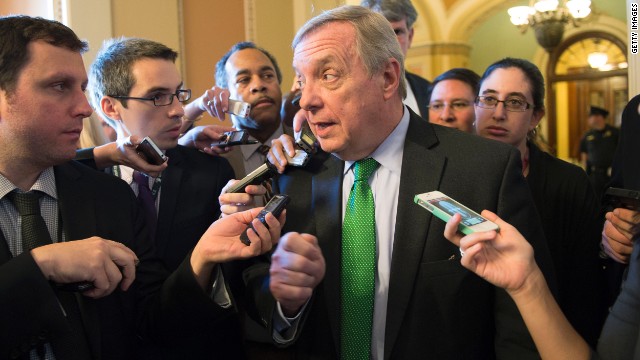 The disputed story - first shared publicly on his campaign Facebook page by the Senate’s number two Democrat, Sen. Dick Durbin of Illinois - that an unidentified senior House Republican leader during negotiations over the debt ceiling and partial government shutdown told President Obama, “I cannot even stand to look at you,” made its way from the White House to the Senate via White House deputy chief of staff Rob Nabors, sources tell CNN.

Nabors told the story to Senate Majority Leader Harry Reid, D-Nevada, Durbin, and the two other Senate Democratic leaders, Sen. Chuck Schumer of New York and Sen. Patty Murray of Washington, on Tuesday October 15, sources tell CNN. Reid then told the story to the entire Senate Democratic caucus, sources in the room at the time tell CNN, identifying the House Republican leader as Rep. Pete Sessions, R-Texas, who denies the story. Durbin posted it on his campaign Facebook page without mentioning Sessions' name.

Sessions isn’t the only one who denies it; on Wednesday White House press secretary Jay Carney was asked about it at his daily briefing and said, “I looked into it and spoke with somebody who was in the meeting and it did not happen.”