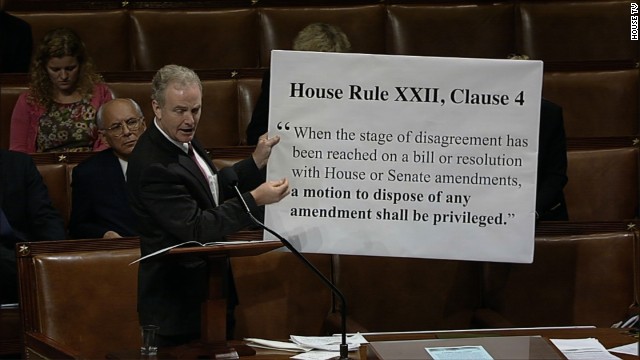 Before the government shutdown, Republicans changed the rule to give that authority to House Majority Leader Eric Cantor, R-Virginia, or his designee for this legislation.

The move was little noticed until over the weekend, when Rep. Chris van Hollen, D-Maryland, the ranking Democrat on the House Budget Committee, raised an objection to the rule change on the floor of the House in a Youtube video that has gone somewhat viral, since accruing more than 600,000 hits. You can watch that video here.

“It’s a big deal,” van Hollen tells CNN in an e-mail. “Under the Rules of the House, in the very particular parliamentary situation we find ourselves in (i.e. disagreement between House and Senate amendments on the bill) ANY member of the House, as a matter of privilege, could have called up the Senate amendments for a vote (because the Rules were written to try to expedite the resolution of differences between the two houses when there was a majority of each house in favor of a particular resolution).”

That said, van Hollen continues, “On October 1st, the R's passed a Rule to change the Standing Rules of the House so only Cantor or his designee could bring up Senate bill for a vote. I am told that we never played with this Rule when we were last in Majority and we are looking into the earlier history of this matter. In other words, they shut down the government and then changed the House Rules to keep it shut down.”

House Republicans see the issue differently, saying that their rule change simply ensures that what they see as the Senate’s refusal to negotiate is not rewarded with control of the House floor.

“The House acted in good faith to open up negotiations with Senate Democrats but Majority Leader Harry Reid dismissed the idea of bipartisan talks,”  said Doug Andres, spokesman for the majority on the House Rules Committee. “That partisan refusal to negotiate should not be rewarded with control of the House floor. The easiest way to settle this is for both sides to sit down and finally talk.”

Republicans argue that the rule allowing members of the House to bring up Senate bills in such a situation was traditionally used by committee chairmen to quickly dispose of amendments in disagreement between the House and Senate back when that was a commonly used procedure, before 1996. They say they’re unaware of another instance where this practice - which wasn't codified as a rule until 1999, they argue - was used by another member other than a committee chair.

House Republicans argue that they have plenty of examples of the Democrats implementing even more stringent rules changes when Pelosi controlled the House, complaints that can be seen in this memo.

The rule changes tend to be complicated and confusing – “That section 151(e)(1) and section 151(f)(1) of the Trade Act of 1974 shall not apply in the case of the bill (H.R. 5724) to implement the United States-Colombia Trade Promotion Agreement,” for example, was a Democrat-pushed rule change that took the US-Colombia Trade Promotion agreement off the "fast track" procedures, meaning that Congress would be able to amend or veto whatever the president negotiated.