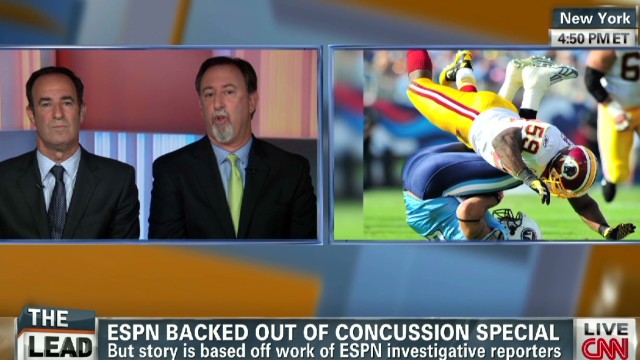 Monday night's NFL match-up is seen as a potential comeback moment for the 1 and 3 Atlanta Falcons as they take on the 2 and 2 New York Jets. But PBS' "Frontline" will be paying special attention to the game, looking for concussions. They have a 2013 "concussion watch" website, and have 36 so far this season.

It's all part of their latest project, what they call "The NFL's Concussion Crisis" – a two-hour special report they did with brothers and ESPN investigative reporters Steve Fainaru and Mark Fainaru-Wada. The brothers' book "League of Denials" comes out Tuesday.

One unwilling partner in the projects, according to the brothers and "Frontline," was the NFL.

The NFL did not purposely throw up roadblocks to their reporting, says said Fainaru.

"The roadblocks that they threw up were basically not making anybody from the NFL available to us," said Fainaru. "We told them what we were doing really because we wanted to be transparent and inclusive, and let them know what we were doing, and they politely declined, and declined every subsequent request we made along the way trying to report this book and this film."

The book tells many tragic stories, one of the most vivid being of Pittsburgh Steeler center Mike Webster, also known as 'Iron Mike' – a heroic figure in Pittsburgh, who played with four championship teams as the dynasty of the Steelers was built.

Webster died in 2002, and became "patient zero" when he was found to have chronic traumatic encephalopathy, or CTE.

"Upon his retirement, he effectively went mad. And Mike began to realize as he was losing his mind over that time, that he believed that football was what had caused his brain damage. In fact, he even eventually had five doctors who agreed with him," said Fainaru-Wada.

"But it's not until he dies and ends up on an autopsy table (that) a young junior pathologist examined Mike's brain, and then discovers he has this neurological, neuro-degenerative disease, CTE, the first in a football player. And that is really the launching point for the concussion crisis in the NFL," said Fainaru-Wada.

But at the time, the NFL was putting out opposing information. The brothers write in their book that the league began rolling out numerous scientific studies. The head of the Traumatic Brain Injury Committee wrote in the journal "Neurosurgery" regarding brain injuries, saying, "This injury has not been observed in professional football."

The editor in chief of the journal was a neurological consultant to the New York Giants.

"What's so striking is that you have parallel narratives going on at the time. You have on the one hand a
growing body of as many as a dozen neuroscientists, many of whom were affiliated with the NFL or loved professional football, who are trying to warn the league that this was a growing problem," said Fainaru.

"While at the same time, you had the NFL's own research arm denying that in fact, it could possibly be true and putting out papers that were essentially saying that NFL players were superhuman, that they were impervious to brain damage," said Fainaru.

CNN reached out to the NFL. The league's senior vice president of health and safety policy responded to the brothers' reporting in a statement which said, in part:

"For more than two decades, the NFL has been a leader in addressing the issue of head injuries in a serious way. Important steps have included major investments in independent medical research; improved medical protocols and benefits, innovative partnerships with the CDC, NIH, GE and others to accelerate progress."

The NFL just this year reached a $765 million concussion settlement that would provide money for medical exams, concussion related compensation for NFL retirees, and their families. The settlement also included $10 million toward medical research.

"Mike Webster, who is patient zero as we talked about in this, he's not eligible in this. Nobody who died during that period of time and prior to, I believe it's 2006 is eligible," said Fainaru-Wada.

"As well, there's a real question about whether there's enough money to go around in the settlement," Fainaru-Wada. "We found over 300 players at this point have qualified for monies based on neuro-cognitive
issues, and there are some real questions of whether that $765 million in the end are going to be enough for all these players who are suffering."