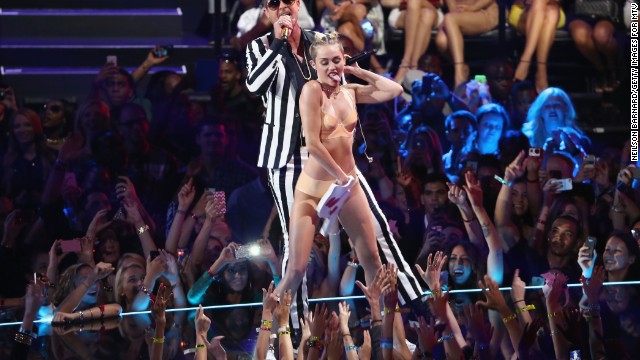 Yes, we are going to discuss the MTV Video Music Awards performance, and show it. But we will not use your name again. It will be like Voldemort. The question is, why did "She-who-shall-not-be-named" commit that act which should not be done, and where does it rank among the eye-popping moments that should not be forgotten?

It wasn't the back up dancers dressed as so-called furries, it wasn't the one-piece tribute to Chucky Cheese, it wasn't even the twerking. All that can be expected at the VMAs. All that is now part of She-who-shall-not-be-named's act these days.

It was the foam finger dance with Robin Thicke during the performance of "Blurred Lines" that pushed boundaries, and probably should have had the man in the referee tuxedo throwing a flag. It definitely had a lot of people talking.

She-who-shall-not-be-named – or the artist formerly known as Hannah Montana – is not the first Disney child star to go from rated G to rated Are You Kidding Me?

It seems She-who-shall-not-be-named is following something of a post-kid star playbook, one designed to have fans say, 'Hannah, we're not in Montana anymore.'

"She's grown into a different kind of entertainer that frankly her fans – and there are legions of them – still find entertaining. I think part of her brand is to be a white hot mess, and I think she delivered in a spectacular way last night," said Bill Werde, editorial director at Billboard Magazine.

She-who-shall-not-be-named is having some success. Her "We Can't Stop" single and video are certified hits, even with certified furries.

There may also be a double standard among all the outraged, gaping mouths out there. There was, after all, another performer involved in the finger folly. As one tweet noted, "Why isn't Robin Thicke a slut?"

"For one of the first times in a big, pop cultural moment, the female is the aggressor," said Werde. "We don't know for a fact that Robin Thicke was in on this, but it was very clear that Miley Cyrus wanted to be humping and nuzzling."

And what about Justin Timberlake? He was idolized and lionized at Sunday's VMAs, but his hand was partially responsible for revealing one of the most infamous sights in TV history – Janet Jacksons's Super Bowl breast breakout.

And while Timberlake didn't bare his breast on "Saturday Night Live," he did, albeit jokingly, put his "D**k in a Box."

Hours after the performance, her songs "We Can't Stop" and "Wrecking Ball" shot to number 5 and number 2 on the iTunes charts. MTV said 10 million people watched the VMAs, up 66% from last year's show.