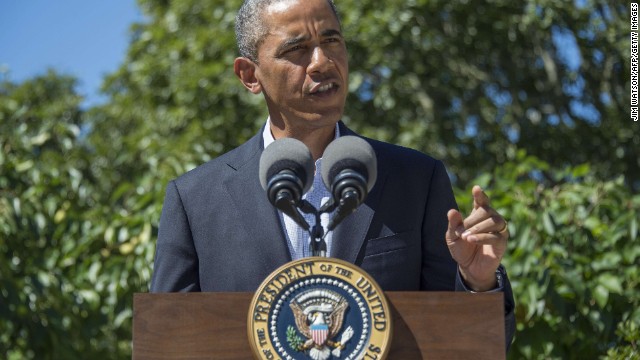 Discussions about canceling the joint U.S.-Egyptian military exercise known as “Bright Star” began in June, around the time the Obama administration canceled the delivery of four F-16 fighter planes to the Egyptian Air Force as a way of registering displeasure and concern with the Egyptian military’s behavior during and after the ouster of former President Mohammed Morsy, a senior White House official told CNN.

“When we postponed delivery of F-16s, we raised the issue of canceling Bright Star," said the official, who requested anonymity so he could speak candidly about the president’s thinking. Then came the camps of pro-Morsy supporters. “We were pressing them to not clear the squares,” the official said, “and when they decided to do that anyway, the broadly held view throughout the government was that Bright Star should be canceled.”

The president made the decision last night to cancel the exercise, and he spoke publicly about it this morning to make his position clear, the official said. “We’ve escalated our response to what they’ve done, but now there are bigger questions about the assistance we provide” - $1.5 billion annually – “that we have to consider going forward.”

The decision about U.S. aid, most of which is spent in the U.S. on military hardware, will be “based on foreign policy and national security priorities,” the official said. Specifically, two factors: “We have national security issues in Egypt – the Sinai, the security of Israel, the Suez, and other regional issues. At the same time, it’s difficult to continue a relationship with a government engaging in crackdowns like we saw yesterday.”

The question being debated within the White House, the official said, is how to best push Egypt to go in a different direction. “And the point we’re making is not simply that we don’t want them to pursue this crackdown because we have values that make us uncomfortable with violence against civilians, we also don’t think this is good for stability in Egypt” in terms of medium and long term tensions in the country. “Our concern is that an escalating crackdown could bring about a more unstable process, that it risks fomenting longer term instability.”

The senior White House official also noted that while much of the focus on this debate is on U.S. assistance, there is another issue of Egypt’s “international legitimacy” beyond the U.S. “The long term success of the Egyptian economy depends on a steady flow of foreign investment, foreign tourism, support from the IMF and other international economic organizations. So this is not just a question about U.S. support – it’s also about Egypt’s relationship with the international community.”