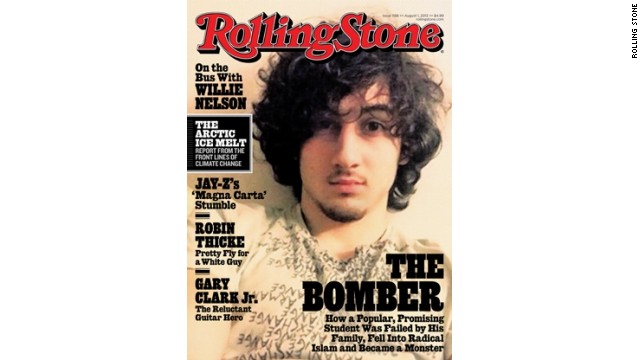 The cover – which prompted the pharmacy chain CVS to announce it wouldn’t sell this issue of the magazine – features a normal image of Tsarnaev looking at the camera, appearing like a normal young man.

The same image once appeared on the cover of the New York Times; objections seem to primarily revolve around the fact that Rolling Stone almost only features celebrities on its covers – most recently Johnny Depp – and thus this image would put an accused terrorist into that category, of someone to be celebrated.

The headline reads: “THE BOMBER: How a Popular, Promising Student Was Failed by His Family, Fell Into Radical Islam, and Became a Monster.”

@ErikWemple @jaketapper Isn't black and white. A disaffected US kid could see this and think terrorist are afforded rockstar status.

“This is good journalism,” Wemple wrote, “as the photo depicts the same Dzhokhar Tsarnaev that The Post and the New York Times — and others — depicted in deeply reported pieces. That is, a regular, good guy with friends, interests and activities — a ‘joker,’ even.”

Wemple also wondered if those protesting the cover “would have a tabloid treatment in which Rolling Stone would place horns on Dzhokhar Tsarnaev. Perhaps that would have made this nonsense go away.”

In an interview, Vietor elaborated on his disagreement with the decision to put Tsarnaev on the cover.

If a “depressed, disaffected” kid is contemplating joining a terrorist organization or committing a terrorist act, Vietor said, “the best case scenario is you end up dead and your family is devastated by your nihilistic actions. It’s tougher to make that argument if kids see terrorists given immortalized rock star status.”

Vietor said he found compelling arguments that he’s heard from journalists that the media should limit the amount pictures of terrorists are shown, so as to not encourage such behavior, “in the same way at football games you don’t show people running on the field.”

He also noted that some of the initial coverage of the bombers reported that “these guys got their plans from Inspire magazine,” put out by al Qaeda. And he found it “troubling” that media outlets, in reporting the role of Inspire, might be sending other would-be terrorists onto the Internet for the instruction manual.

The native Bostonian - who along with former White House director of speechwriting Jon Favreau has a consulting shop in Washington called Fenway Strategies, named after the fabled baseball field, Vietor said “Boston is stronger and more resilient than these bombers, and this cover is not going to change it.”