Sarah Murnaghan, a 10-year-old Pennsylvania girl with cystic fibrosis whose family fought to have her prioritized for adult organs, is getting a new set of lungs, her family told CNN on Wednesday.

The parents' push for an organ transplant policy change has thrust the issue of who gets donated organs into the national spotlight. Earlier this week, the Organ Procurement and Transplant Network (OPTN)'s executive committee approved a one-year change that makes children younger than 12 eligible for priority on adult lung transplant lists.

On Wednesday morning her mom posted an update on Facebook, saying "God is great! He moved the mountain! Sarah got THE CALL. Please pray for her donor, her HERO, who has given her the gift of life."

If Murnaghan makes it through the surgery, her chances of survival remain uncertain.

"If you take all lung transplants across the board, about five years after the transplant, survival is around 50/50," said CNN's chief medical correspondent Dr. Sanjay Gupta.
END_OF_DOCUMENT_TOKEN_TO_BE_REPLACED

Kanye's so money, and he knows it

Kanye West is giving mad props to the one man he thinks never seems to get enough recognition for his majesty: Kanye himself.

For those who found the moment when he grabbed the microphone from Taylor Swift too deferential and polite, West's recent interview with The New York Times is so over-the-top, it almost reads like a "Saturday Night Live" sketch.

West at one point refers to himself as the "nucleus" of culture, begging the question - purely as a scientific matter - as to whether that would make his unborn child with Kim Kardashian the "neutron" of culture?

He also compares himself to former Apple CEO Steve Jobs saying, "I am undoubtedly, you know, Steve of internet, downtown, fashion, culture. Period. By a long jump."

West goes on to say, "I am so credible and so influential and so relevant that I will change things."

In fairness, there are a few points when West dares to explore the notion that he is but a mere mortal. When asked about that infamous Taylor Swift interruption at the 2009 MTV Video Music Awards and subsequent apology, he said, "My message isn't perfectly defined. I have, as a human being, fallen to peer pressure."

An admission of imperfection, from a guy who named his upcoming album "Yeezus," featuring the fresh new track "I Am God."

In a new interview with Hong Kong newspaper The South China Morning Post, National Security Agency leaker Edward Snowden says the U.S. has been hacking Chinese and Hong Kong computers since 2009. The paper said it viewed documents supporting Snowden's claim, but was unable to verify them.

The Guardian's Glenn Greenwald - the journalist who first broke the story of the NSA's vast surveillance system - told CNN "The Lead's" Jake Tapper Monday that there are more stories to come. 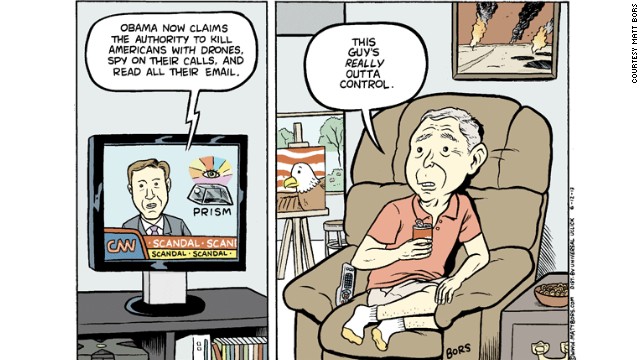 Bors, 29, is one of the industry's youngest, full-time political cartoonists.

Check back with 'The Lead' for an upcoming story with Bors, and in the meantime, watch Bors and Tapper 'toon-off' in this web-exclusive clip.
END_OF_DOCUMENT_TOKEN_TO_BE_REPLACED

Analysis: Should reporters be prosecuted?

Details continue to unfold about Edward Snowden, the man who shook the U.S. intelligence community by leaking details of secret surveillance programs. Snowden is believed to be staying in a "safe house," the British newspaper that first broke the story reported Wednesday.

Attention is now focused on the journalist, Glenn Greenwald, who works for The Guardian newspaper. Republican Congressman of New York Peter King told CNN's Anderson Cooper Tuesday that he thinks the journalist should be prosecuted.

"If they willingly knew this was classified information, I think actions should be taken, especially on something of this magnitude," said King.

"I think something on this magnitude, there is an obligation, both moral and also legal, I believe, against a reporter disclosing something which would so severely compromise national security," said King.

In response, Greenwald tweeted, "Is it true, as I was just told, that Peter King on CNN called for criminal prosecution of journalists reporting the NSA stories?"

The U.S. government has been at odds with journalists of late, with recent revelations that the Justice Department scrutinized reporters around a high-profile national security leak investigation, acquiring subpoenas for Associated Press phone records, and also subpoenaed phone records of Fox News reporter James Rosen.

But it is unlikely that charges will be brought against Greenwald.
END_OF_DOCUMENT_TOKEN_TO_BE_REPLACED