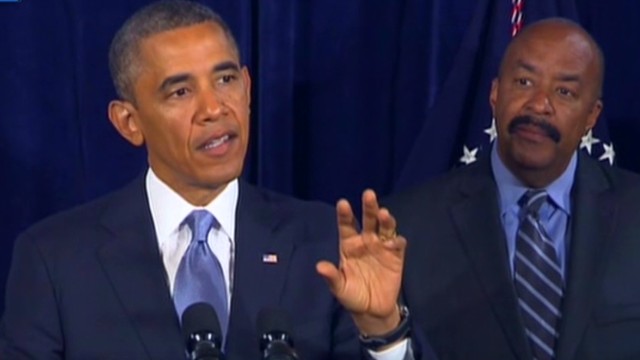 Despite Obama claim, appears not all members of Congress got the call on NSA phone snooping

President Barack Obama's push back to criticism of the National Security Agency surveillance programs is that he has increased checks and balances, bringing the foreign surveillance courts into the process, for instance, and - he insists - looping in Congress.

"When it comes to telephone calls, every member of Congress has been briefed on this program," the president said Friday.

Here’s the problem with that: It is not true - every member of Congress has not been briefed on the phone data program.

"Some members of Congress know about this but a lot don't. I mean, if you're not on the intelligence committee, you may not be in the loop at all. I'm not," Democratic Congressman Keith Ellison said on CNN's "The Lead" Friday.

Jessica Yellin: Jay, on Friday the president said, quote, "When it comes to telephone calls, every member of Congress has been briefed on this program." What's he talking about?

Jay Carney: Well, as you know, the so-called, I think, Section 215 program has been notified to all members of Congress. I would point you to a letter from Senator Feinstein where she says this is from the business records provision of the Patriot Act in 2001. It was renewed in 2005, 2010 - rather, 2009, 2010, and 2011. Before the last two renewals, both the vice chairman of the Intelligence Committee and myself sent a letter to every member of the Senate saying this was the case. Additionally, the Intelligence Committee has had hearings on this. The Judiciary Committee has hearings - has had hearings on it and it's been out on the floor. I think that -

Yellin: Was something comparable extended to members of the House? Because I've asked around, and nobody has been able to find any similar...

Carney: In - in - in these cases, there has been substantial provision of information to Congress, both depending on the section we're talking about of the Patriot Act, either to all members or to the appropriate committee members and leadership. It is also important to step back and recognize that, when we talk about section this and section that, we're talking about sections of a public statute that was debated, passed, renewed, debated again, passed, altered, passed with bipartisan majorities.

Yellin: ... Congressman Sensenbrenner, who is the coauthor of the Patriot Act, says the FISA order related to telephone calls is not consistent with the Patriot Act, as he understood it. And Senator Udall said, while the law itself has been public, the way it's interpreted have been secret until now, and he says the law should be reopened. Does the president agree...

Carney: Well, again, the president believes that this is...

Yellin: ... that the law should be reopened and this is an opportunity to do that?

Carney: The president made clear on Friday that he believes that it is entirely appropriate to debate these matters. As we find the appropriate balance between our national security interests, our security interests on one hand and our privacy interests on the other. He also made clear that you cannot have 100 percent security and 100 percent privacy or zero inconvenience, but - and that he believes we are achieving an appropriate balance, … but he welcomes a debate, and certainly if that debate were led - were to lead to building a consensus around changes, he would look at that, because, again, I think the president's been very clear that he takes the concerns about these issues very seriously, because he thinks these are broad matters that - broader in some ways than - than the specific instances that we're talking about, and as I alluded at the top, you know, in the age that we live in, with the technological innovations that we see constantly, this is an issue that will be with us as a nation and a
world from this time forward. So it's something that we need to constantly assess and debate, but it is also true that we need to be very mindful of the fact, as the director of national intelligence has said and others, that these are - these programs exist in order to protect the United States and its citizens from attack.

All House members were invited to be briefed on Section 215 of the Patriot Act, including principal-level briefings for the House Republican and House Democratic Caucus briefings in May 2011. An invitation to all senators to discuss with principals off the senate floor was sent in February 2011.