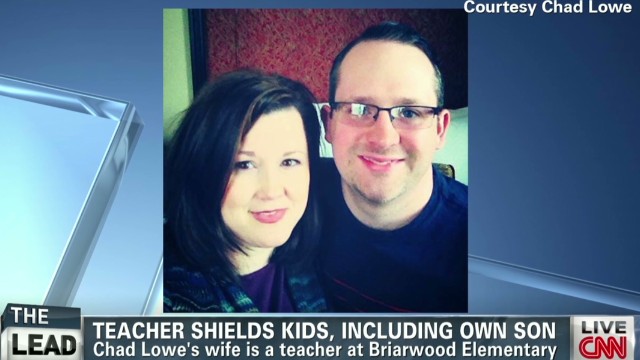 First grade teacher Cindy Lowe of  Briarwood Elementary School risked life and limb to shield the kids in her classroom from the deadly tornado that ripped through Moore, Oklahoma, on Monday.

Lowe's 6-year-old son is a kindergarten student at the school and before the tornado obliterated the building, she called his teacher and said, "'Can you send my son to my room, bring him to my room,'" Cindy's husband, Chad Lowe, told CNN.

Then, Cindy's instincts kicked in.

“They routinely practice drills and the idea is you get to the center-most part of the room,” said Chad Lowe said.

Cindy’s classroom had a built-in bookshelf near the center of the room. She had her students line up in the fetal position alongside it, and grab a book and use it to protect their heads.

"My wife then got some desks and pushed those up, giving them a shield from the rear," her husband said.

Then there was a knock on the door, another parent - a teacher's assistant -  who wanted to come into the classroom.

Cindy let her in, then she looked up, saw the monster twister bearing down. She realized that she had about 30 seconds before it hit.

She and the other parent joined the children in the center of the room and prayed aloud.

As the tornado destroyed the school, Cindy heard loud popping sounds and glass breaking. The building was crumbling around her. The tornado blew in a cinder block wall across the room.

The "wall actually fell on her back, and she kind of lifted herself up,” Chad Lowe said.

Cindy's son and two or three other students were not sheltered by a desk. She shielded the kids by wedging her body between them and the collapsed wall.

The school's gym teacher then came in once the storm had passed over and helped get the kids out from under the wall, and then aided Cindy. She suffered a concussion, cuts and bruises, and a sprained ankle.

"His teacher saved his life," a grateful mother gushed to CNN affiliate KFOR. "I have no doubt that God and his teacher, I mean, they lifted a wall off of these kids."

Chad Lowe said he, Cindy, and their two kids - Evan and 3-year-old Emmalyn - are staying with family in Oklahoma City. Their house survived the devastation, but they are being kept away for safety reasons.

Earlier this year, fittingly, Cindy was nominated for the school's Teacher of the Year Award.