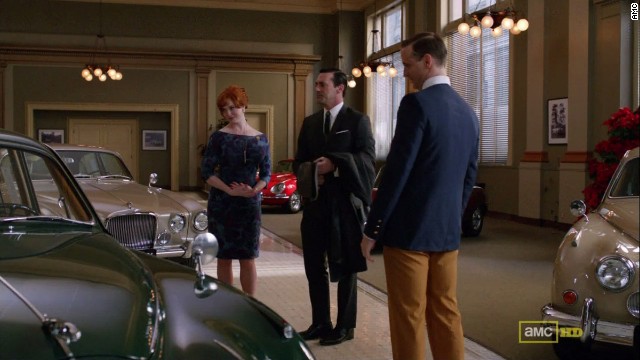 Jaguar not mad with 'Mad Men'

Jaguar played a supporting role in the fifth season of "Mad Men," and not an entirely flattering one. In the AMC show, a Jaguar dealer demands that one of the characters, Joan Harris, sleep with him. And near the end of the season, there was a macabre joke about the unreliability of Jaguars when another character, Lane Pryce, tries to kill himself.

"Jaguar, I mean, they would have never agreed to participate financially in a show if they knew the story. So they didn't. So I have to do it independently of them," "Mad Men" creator Matthew Weiner told CNN's Jake Tapper. "In the end, whether they ride a roller coaster or not, in terms of how the agency feels about them, or how the show is treating them, I think for the most part, they are secretly very happy to be in the public eye on this show."

"We quickly realized it would be, as Matthew said, a roller coaster," said Schorr.

The "Mad Men" story line quickly sparked intense online discussion, and Jaguar jumped on it, tweeting out comments and reactions to episodes.

When Lane Pryce tries to kill himself, his new Jaguar won't start.

"Well, at least it didn't happen in the #EType," JaguarUSA tweeted.

In the 1960s, British cars - Aston Martins, Jaguars, and others - had a worldwide reputation for electronic malfunctions. Schorr said the company is well past that reputation, ranking 2nd in a well-respected car industry quality survey.

"We're past that, so we were able to laugh at that bit of our history," said Schorr.

But even the communications director and "Mad Men" fan said he was worried when Lane Pryce tried to kill himself in the car. Schorr said he was watching the show at home with his wife, dreading the outcome.

"I was honestly feeling, ‘Oh no, the last thing anyone wants to see is something like this happen with the car,'" said Schorr. When the car failed to start, he said he personally tweeted, "I’ve never been so happy to see a Jaguar car not start."

The company also capitalized on the sleazy story line with Joan, where a Jaguar dealer demands that she sleep with him in exchange for signing an ad deal with Sterling Cooper Draper Price. JaguarUSA tweeted "Loved the pitch, didn't love the process." They also later had actress Christina Hendricks, who portrays Joan, attend the launch of a new Jaguar.

But not everyone at the company was happy with "Mad Men's" Jaguar narrative. Schorr said several colleagues were shocked and upset with the portrayal.

"One guy called me whose father worked on the ad account in the 70s, and was really offended," said Schorr.

It is unclear if Jaguar will continue to be a prominent character in the show's upcoming sixth season. Regardless, Schorr said, he and colleagues will definitely be watching.