"Iron Man 3" features a Hollywood super hero, a Malibu mansion, and Air Force One makes an appearance. This is as American as it gets.

But the upcoming blockbuster is tweaking its tone to appeal to Chinese audiences, making a second version just for them. China is now the world's second-largest movie market behind the U.S., passing Japan last year with nearly $3 billion in box office revenue. Hollywood is taking notice, relying on experts like Robert Cain for guidance.

"I really encourage filmmakers in Hollywood to think about China to develop stories that will appeal there . . . and to really go after it," says Cain, president of Pacific Bridge Pictures. Cain has worked with American and Chinese film industries for 20 years. "It's such a big growing market if all you did was make movies for the Chinese market, you could do very well in the next few years."
END_OF_DOCUMENT_TOKEN_TO_BE_REPLACED

Investigators will not, or cannot yet say for sure what led to the murders of a Texas district attorney and his wife over the weekend. The chilling case, along with the murder of an assistant district attorney in the same county a couple months back, stirred fears that public officials in Texas are being targeted. Now state and local authorities are on high alert.

Who's next? That's the question gripping Kaufman County. Courthouse security has been beefed up in the Kaufman town square, and law enforcement officers say special security measures are being taken to protect other elected officials.

There seem to be few leads and no suspects in the hunt to find the killers of prosecutors Mark Hasse and Mike McLelland, the uncertainty of what might happen next is chilling.
END_OF_DOCUMENT_TOKEN_TO_BE_REPLACED

Caroline Kennedy being vetted to serve as U.S. ambassador to Japan

Caroline Kennedy was America's daughter with an early flair for poetry, even naming her famous pony Macaroni. The White House was her playground. But tragedy struck Camelot. After her father's assassination and a very public childhood, Caroline Kennedy stayed out of the spotlight, marrying an artist and maintaining a quiet life in New York with her three children. She joined boards of charities and raised money for causes she champions, like literacy.

But after the death of her brother John Jr. in a plane crash, she became the last link to her father's legacy. But it was her Uncle Teddy who spoke for the family, giving the eulogy at John Jr.'s funeral. Almost a decade later, she found her voice. In 2008, a dashing young first-term senator was running for president. For many, Barack Obama was reminiscent of JFK from almost 50 years before.
END_OF_DOCUMENT_TOKEN_TO_BE_REPLACED

If North Korea's rhetoric escalates to war, it would be the last on the Korean peninsula

His people are starving, his economy is a mess, so what is North Korean leader Kim Jong Un's new plan for success? He is declaring all out war with South Korea, talking about beefing up his nuclear arsenal, and calling the United States names, like "boiled pumpkin."

The defense department is calling this nothing more than "war-mongering rhetoric." But National Security officials behind closed doors may think this is something more serious.

If I were representing the administration, said Richard Haass, president of the Council on Foreign Relations, I would pass the message privately to China and North Korea "that if this escalates to a war, this will be the last war on the Korean peninsula, because the United States would not stop until all of Korea is unified under the south."
END_OF_DOCUMENT_TOKEN_TO_BE_REPLACED 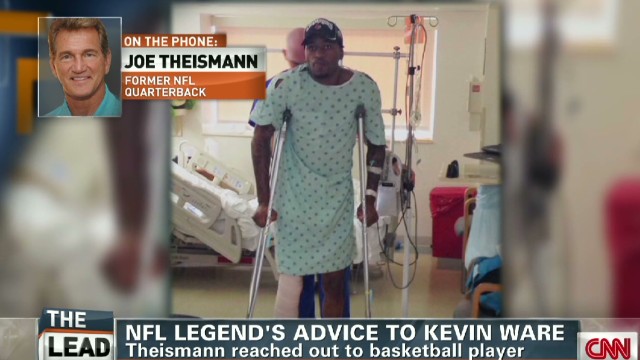 Louisville sophomore Kevin Ware's injury during Sunday's "Elite Eight" showdown with Duke instantly became one of the most horrific in sports history. You don't have to see the leg snap, or the bone break through - the reaction of the players on the Louisville bench says it all.

One athlete who knows all too well the bone-crushing pain Kevin Ware is going through is Joe Theismann, the former Redskins quarterback whose career ended in 1985, when his leg was broken midway between his knee and his ankle when he was hit by a New York Giants linebacker. Theismann watched the Louisville-Duke game, and like millions of viewers, saw the moment Ware's leg broke.

"I got chills, I did, right away," Theismann said. As soon as Ware went down, the injury and the aftermath began "bringing back and conjuring up memories of what I went through some 28 years ago."
END_OF_DOCUMENT_TOKEN_TO_BE_REPLACED