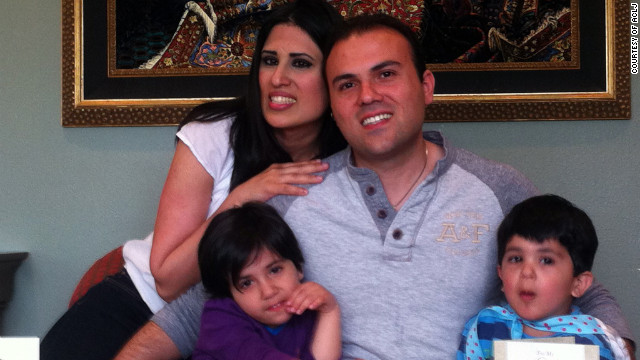 His children cry out for him. His wife wonders about his “survival battle.”

Such is the struggle of the family of an American pastor recently sentenced in Iran to eight years in prison for his Christian beliefs.

The couple's two children "miss him terribly. They cry, they ask for him," wife Naghmeh Abedini says. "They're struggling every day."

Her husband Saeed Abedini, a U.S. citizen of Iranian birth, was arrested and charged in Iran last June during a visit. Abedini, 32, converted to Christianity from Islam and then became a pastor, living in Boise, Idaho. He has reportedly been detained in Tehran's notorious Evin Prison since late September. In the Islamic Republic of Iran, a Muslim who converts to another faith can face the death penalty.

"They've charged him with Christian gatherings, and they're saying it is a threat to the national security," Naghmeh Abedini said.

Her husband had visited Iran 10 times since 2009, and was working on a a government-approved orphanage when he was arrested last year, Abedini said. His parents also live in Iran.

"It was quite a bit of a surprise for us that they did arrest him, but they've been cracking down on Christianity more with the revolutionary guard getting involved in the last few months," Naghmeh Abedini said in an interview aired Thursday.

It has been more than nine months since she last saw her husband. He has been imprisoned for more than 180 days.

"The last time I was allowed by the government to speak to him was January 9th, it was only a few minutes," Abedini said. "He was mainly talking to the kids and telling them how much he loved them."

From prison, Saeed has written letters to his wife. One of them read:

"Maybe you ask what is the secret of being so happy in such a hard situation? Forgiveness and a change of attitude. When we forgive, we become free and we become messengers of peace and reconciliation and goodness."

He also wrote of not receiving medical treatment for internal bleeding that he suffered from beatings. Abedini says she is worried he will not survive his prison sentence.

"Every day is a survival battle, and that's why we've been fighting to get him out as soon as possible," she says. "He's already been there long enough."

The American Center for Law and Justice is representing the Abedinis. The group's executive director Jordan Sekulow says they reached a major milestone in trying to free Saeed Abedini when Secretary of State John Kerry issued a statement directly calling for Saeed's release last week. The ambassador to the U.N. Human Rights Council for the United States also called for his release.

These are "the first two really high-level officials ... to put these statements on the record, which was really important for the world to know, and for Iran," says Sekulow.

"Since that hearing, I've noticed more action. They've promise to do more, even though I'm still not sure exactly what's being done with the diplomatic efforts," Abedini says, adding that it was great news for  Kerry to come out with such a strong statement. Still, she is hoping even more can be done.

"I'm hoping every action is being taken to get Saeed out of that prison before he loses his life there," she said.

In January, Saeed Abedini was sentenced by a member of the Islamic Republic's Revolutionary Court, according to the American Center for Law and Justice, an organization founded by television evangelist Pat Robertson.

“I am disturbed by reports that Mr. Abedini has suffered physical and psychological abuse in prison, and that his condition has become increasingly dire,” U.S. Secretary of State John Kerry said in a statement. “Such mistreatment violates international norms as well as Iran’s own laws.”

Kerry said he was also “troubled by the lack of due process in Mr. Abedini’s case and Iran’s continued refusal to allow consular access by Swiss authorities, the U.S. protecting power in Iran.

“The best outcome for Mr. Abedini is that he be immediately released,” Kerry added.

In January, U.S. State Department spokesman Darby Holladay added that Iran violated “the universal right of freedom of religion.”
At trial, the pastor appeared with his attorney in a Revolutionary Guard Court to address charges of attempting to undermine the Iranian government, but his attorney apparently was shut out of some proceedings.

The group contends that charges stem from Abedini's conversion to Christianity from Islam 13 years ago and his activities with home churches in Iran.

The judge in the case has faced sanctions by the European Union "because of his harsh sentences for those on trial for exercising a fundamental human right," the center said.

Naghmeh Abedini has previously said that a few laymen with the Christian church in Iran told her husband's attorney that they had been called to testify in the case.

In January, the Iranian state-run news agency ISNA reported that the pastor would soon be released on bail – which Naghmeh Abedini said at the time was "clearly a lie."

His wife has said he felt that it was safe to go back repeatedly because he had had no dealings with the authorities since he promised to stop working with Christian home services.

Once he even went with his wife and two children. His wife is also a convert to Christianity from Islam, and they received threats during the most recent family visit, so she took the children home. He returned to their home in Idaho later.
Last summer, the pastor was on a bus that was crossing from Turkey into Iran. Immigration officials took away his passport and he was later put under house arrest.